The selection and subsequent election of Senator Kamala Harris to the post of vice-president serves, for Jennifer R. Farmer, as a beacon of hope and validation of what black women can achieve with hard work, tenacity and the support of their village and the alignment of the stars.

Farmer, a seasoned activist, public relations expert and practitioner, recently published “First and Only: A Black Woman’s Guide to Thriving at Work and in Life,” which discusses the challenges black women face when in the workplace. both the first and the only in professional spaces. and provides a roadmap to success.

“The book talks about the unrealistic expectations, racism, sexism and thinly disguised hostility associated with being the first or onlysaid Farmer, founder of Spotlight PR LLC, a boutique company specializing in communications strategy and training leaders and groups committed to social and racial justice. “While the appointment, selection or ascension of a black woman to an important role is exciting, there is an underbelly associated with career progression. “

“I’ve been doing this for 17 or 18 years,” said Farmer, from Columbus, Ohio, whose mother is from Barbados and whose father has Southern roots. 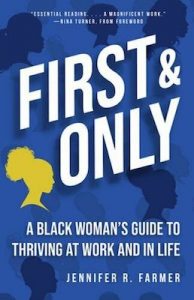 “My mother was very strict. We lived in poverty in subsidized housing where there was a high incidence of violence. Fortunately, my mother protected us. I wanted to escape the city I was in. What attracted me to public relations was wanting to get involved in racial justice – to advocate and help people tell their stories.

Farmer, an author and speaker known as “the PR Whisperer,” said she was looking for a union whose members wanted or needed publicity and were looking to tell their stories. She appreciated the way unions benefit society as a whole and was eventually hired by the Service Employees International Union.

In 2016, she founded Spotlight PR, a boutique company specializing in public relations and training for leaders and groups committed to social and racial justice. She works with a host of top clients including activist, rapper and businessman Michael Render aka Killer Mike – host of the Netflix show, “Trigger Warning with Killer Mike” and half of the rap duo Run the Jewels, Art, Beats & Lyrics; the Rev. Dr. William J. Barber II; author Edgar Villanueva (Decolonizing Wealth); Bankhead Seafood; and various social justice organizations such as the Funders’ Collaborative for Youth Organizing, Repairers of the Breach, United Methodist Women and the Religious Coalition for Reproductive Choice.

The mother-of-two said her motivation for writing the book was to approach and focus on the experiences of professional black women who were told they were too loud, aggressive, assertive, not nice enough, not enough or too much.

“I made the intentional decision not to speak to women of color because the experiences of black women need to be singularly mentioned,” said Farmer, a University of Rochester graduate. “I also feel like a lot of times people use women of color or people of color without distinguishing the unique experiences of various groups. I wanted to be clear that it’s okay to speak directly to black women without expecting our uniqueness to be overshadowed again. “

“I couldn’t manage like my white bosses and expected to hear the compliments they were getting. When I started to hear things like “you have to be nicer” I internalized it and believed that something was wrong with me as a human being.

“It wasn’t until I started being vulnerable and talking to other black women that I learned that we all heard comments that made us a problem with the workspaces around us. Hope black women find gems [in my book] to add to their toolbox to help them isolate themselves from noise, grow stronger, survive and thrive as a first or only Black woman in professional spaces or unique life experiences.

Farmer looks at the rise of women like Harris, Marilyn Mosby, Kim Foxx and Aramis Ayala who all broke barriers to become the first black women elected state attorneys in their respective cities and regions. The quartet represents trailblazers in an era when African American women broke glass ceilings and barriers in public spaces, including politics, commerce, media, medicine, and law enforcement.

Farmer said she was elated when President Joe Biden picked Harris as his running mate, but notes that from the moment Harris announced his intention to run for president, she faced headwinds of sexism, racism and gender bias.

“People expected Harris to put on a brave face, smile and perform superbly despite what she might have faced as the first and only one,” Farmer said months before Harris was picked.

“People will hold her accountable for things over which she has no control. Attacks will come from all sides, even from people you think are nearby. The obstacles she will have to overcome will be enormous, despite her partnership with a prominent Democrat. “

“She is still black, a person of color and a woman and with that she will have to face challenges,” she said.

“It’s not insurmountable, as his entire career has shown. But it is important that her village supports her, that she has spaces where she can be authentic and vulnerable, and that she walks to the beat of any drum that is comfortable and realistic for her.

Farmer took her own advice and said she always walked to be beaten with her own drum.

“This book is both a self-help guide and a business book focused exclusively on the unique challenges black women face in work and life,” she said.